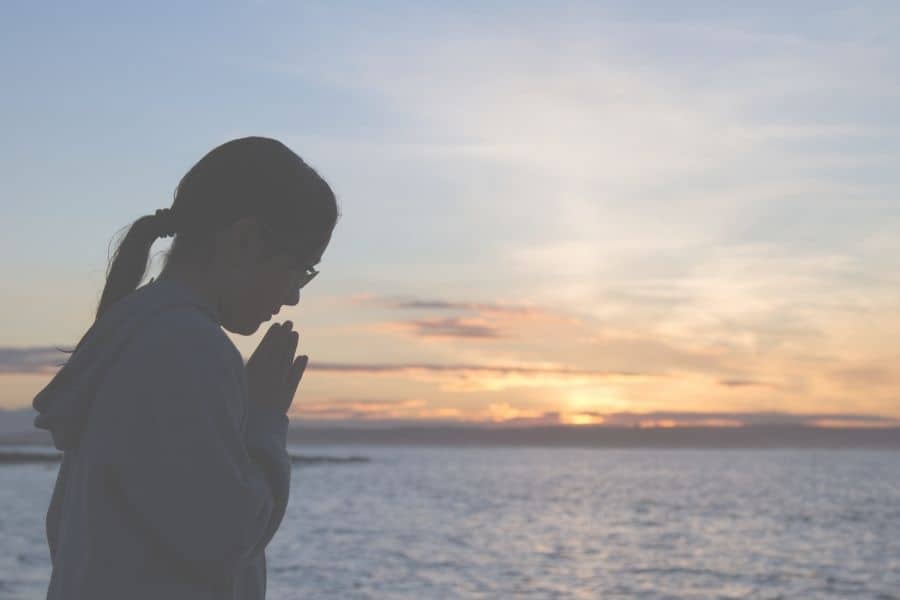 Prayer is such a seemingly elusive subject. So many wise saints over the centuries have written on prayer and pondered the activity of prayer in such depth. I certainly cannot add much to their wisdom, on the contrary, I have much to learn about the subject.

Years ago, a large framed print in a Christian store caught my eye. It was a woman bent to her knees with a Bible open on her lap, head bent in prayer. It was stunning to me. The simplicity of a woman communing with God seemed to draw me in.

As a new believer and a young mom, having recently surrendered my life to Christ, I was desperate for examples of godliness. I had my eyes opened to the Lord after reading a Bible a co-worker had given me.

Having been raised in a home torn by divorce, I sought stability anywhere I could get it. Unbelieving parents had no anchor to offer me, let alone for themselves. So I found false firmness in the sands of my own belief system. I claimed atheism as my stance and my stubborn heart held on weakly, hoping always for more.

Once the Lord gripped my heart, I was ruined for anything else. I grabbed hold of Him and held on, and when I failed He still held me.

But as a mom and wife, I had no idea what godliness in real life looked like. I didn’t know anything about the Word of God prior to salvation. I had never heard of Noah, Moses, Abraham or Jeremiah while I was growing up. And I certainly had no clue the first thing about prayer.

By God’s grace, He brought examples and mentors for me to glean from. Most of these stunning examples came from His Word.

I began to uncover the depths of the Word, seeking what He would say about prayer or any other subject. I took notes, read commentaries and talked about it with anyone who would listen. He fascinated me! He still does!

After walking with the Lord and getting to know Him for the last twenty years, there is one thing that stands out the loudest: He will hold me responsible for what He teaches me. So I try to be careful to practice what He teaches me until it is part of who I am.

Seed laid on top of the ground is food for ravens; but seed sown into the soil brings forth much fruit. Therefore, a study on prayer will never change us unless we actually pray as we learn and let the Holy Spirit of God grow us in intimacy with Him. That is the goal— not head knowledge, but actual life-giving habit change. A renewed mind will never happen without integrating what we learn into the dailiness of life.

Prayer for the believing follower of Jesus is intimate communication with the present and listening God of all Creation. Relationship is at the core of this communication.

Our relationship with Jesus hinges on prayer. Just as a marital relationship is only as strong as the couple is communicative, so it is with the Lord. He communicates with us through His written Word, which Hebrews 4:12 tells us is alive and active and sharper than any two-edged sword. In response we are to communicate back in prayer.

Prayer can be verbal but also crying, singing, silence, and any number of avenues of communication.

What is your favorite way to commune with the Father?

Drop your email below to get Tools for Tending your Soul, a guide to cultivating intimacy with God through His Word for yourself.

3 thoughts on “Simplicity of Communing”